They’re back on the street corners. Every year about this time they show up wearing their caps and carrying baskets. They are volunteers from Veterans of Foreign Wars (VFW), and their baskets are filled with Buddy Poppies.

The Buddy Poppy was born out of a poem about World War I. The poem, “In Flanders Fields,” was written by Major John McCrae, who fought in Belgium and was impressed by blood-red poppies blooming among the rows of crosses at the military cemetery there.

The VFW got involved shortly after the war ended when it announced a program to provide assistance for the widows and orphans of veterans. The effort grew out of the popularity of McCrae’s poem. The newly founded veterans’ service organization ordered paper poppies manufactured by florists and sold them on street corners.

Later they hit on the idea of having disabled veterans make the poppies themselves at VA hospitals and veterans’ homes—a decision that also provided a source of income for the veterans. Buddy Poppies are still made that way today. A total of 848 million flowers have been sold, and annual sales average $16 million. Proceeds benefit veterans in twelve states, a national home for widows and orphans, and various VFW relief funds.

Buddy Poppies drew a lot of attention over the years. For a long time the first poppy of the year always went to the President of the United States, pinned on his lapel by someone from the national home. Later a movie star was named “Buddy Poppy Girl” each year. Over the years Jane Wyman, Doris Day, and Natalie Wood traveled the country making public appearances for Buddy Poppies.

They don’t go to the White House anymore, and movie stars no longer go on tour. But there is still a Buddy Poppy Girl every year, sometimes a resident of the VFW national home.

When I was in grade school, the VFW sponsored a poster contest every year based on the poem“In Flanders Fields.” We were supposed to depict what Buddy Poppies meant to us. The local VFW post judged the entries, and the winning poster went on display in a downtown store window. In retrospect, it was tough for a ten-year-old to have much of a feel for war in the first place. And it was a little confusing because Buddy Poppies and the posters commemorated World War I while we were embroiled in the middle of World War II.

For my poster I drew rows of white crosses and put blooming poppies in between. At the bottom I drew a lifelike image of a Buddy Poppy, and then added the words “Buddy Poppies Help Us Remember Flanders Fields.” I recall that the lettering got a little crowded toward the end of the line, and it wound up saying “Flanders Fils.” I figured since I was the best artist in my class I’d win anyway.

Sadly, I didn’t win the contest. A girl in my class won with a poster showing one cross and one poppy. The lettering said “My Grandfather lies in Flanders Fields.” The man’s name was inscribed on the cross. It was a big disappointment. My grandfather was still alive at the time.

Even then it was a point of pride to buy your Buddy Poppy early and wear it to school all day. I used to insert mine into a buttonhole in my shirt and twist the wire stem around the button. Unfortunately, after a couple of mishaps at the water fountain, the thing usually began to fall apart. But I wore it faithfully until bedtime. 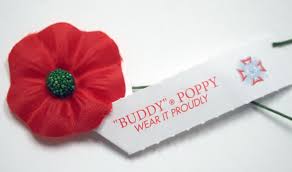 I still buy a poppy every year whenever I find myself on a street corner where they are being sold. VFW volunteers don’t get into the country or to all the suburbs, and sometimes I don’t get one. Several years ago I got into my car and drove downtown just to buy a Buddy Poppy. I remember twisting it into my buttonhole and wearing it on my shirt all day. And sometime during the day I uttered the first words of McCrae’s poem:

“In Flanders fields the poppies blow

Between the crosses, row on row …”