We Used to Play Marbles

Does anyone play marbles anymore? When I was in grade school, not only did we play marbles, it also was a school competition. I had forgotten that until a week ago, when I returned to the small town in southern Missouri where I attended the third grade. 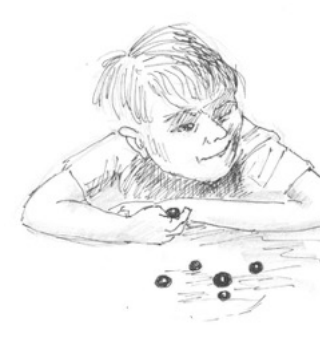 We also rolled hoops, and I had forgotten about that, too. This is not to be confused with shooting hoops, which is, I think, by constitutional amendment required fare in Indiana schools. These were steel hoops between ten and thirteen inches in diameter. We rolled them along in front of us with sticks that had little arms attached to the bottom. The arms formed a V-shaped slot in which the hoop rolled. By twisting the stick, you could turn the hoop to the left or right. Hoop rolling was a competitive activity at my school, too.

I used to comment about hoop rolling to my kids until they flat-out told me that I was making it up. Once they showed me an engraving of a kid in the 1890s. He was rolling a big hoop with a stick.

“Like this, Dad?” they asked with a sneer. I told them the hoops we rolled were much smaller and the stick was different. They looked at me the same way they had when years earlier I had insisted the moon was made of green cheese. Kids have become real cynics.

Back in my third-grade town, I found my way to the small historical society museum. The woman in charge pulled out a dusty folder of old newspapers dated 1943. The war was in full bloom that year, and I wanted to get a little historical perspective to go along with my recollections of multiplication tables and the more advanced adventures of Dick and Jane I remembered learning in the classroom.

In small towns such as this one, the weekly newspaper was a major source of in-depth local and worldwide news. I paged through the yellowed and brittle papers. The War Bond drives told the story of financing the war. One issue explained in exhaustive detail how rationing worked. There was a column each week that gave news of local men and women in uniform.

There was local society news, too, and news from the local schools. The high school football team was having a winning year, and at the grade school, Activity Day featured stiff competition in marbles and hoop rolling. I read the list of winners and gritted my teeth at the mention of my old nemesis, J.D. McGrath. He won in both events. I remember one of the arms breaking on my hoop stick so I couldn’t control left turns without slowing down. There was even a photograph, blurry but discernible, of a pack of boys running the course, pushing their hoops. The historical society had no copy machine, but I took copious notes to offer as proof to my children.

As I remember it, the marbles competition was not supposed to be “for keeps,” but old J.D. made a command decision to keep my marbles anyway and then dared me to complain. J.D. McGrath was a lot like the character Moe who bullied Calvin and Hobbs.

Despite the Activity Day loss, I recall having a large coffee can filled with marbles all during grade school. My favorite taw, or shooter, was a heavy steely. Of course, steelies weren’t allowed in competition. I also had some special “pee-wees” and a handful of “aggies.” The aggies, carved out of Lake Superior agates, would be worth several dollars apiece today.

We also played a game called “mumble peg” with jackknives. There didn’t seem to be a lot of tight rules about the game. You just had to toss the open knife and stick it in the ground from various positions. Nobody played mumble peg for stakes; you just used the game to accent conversation and to beat the boredom. Girls played jacks and jumped rope for the same reason.

But lest I get maudlin, my granddaughter pointed out the other day that kids still play games to augment their lives. Sometimes they go to the mall. And other times they jump into a new video game.